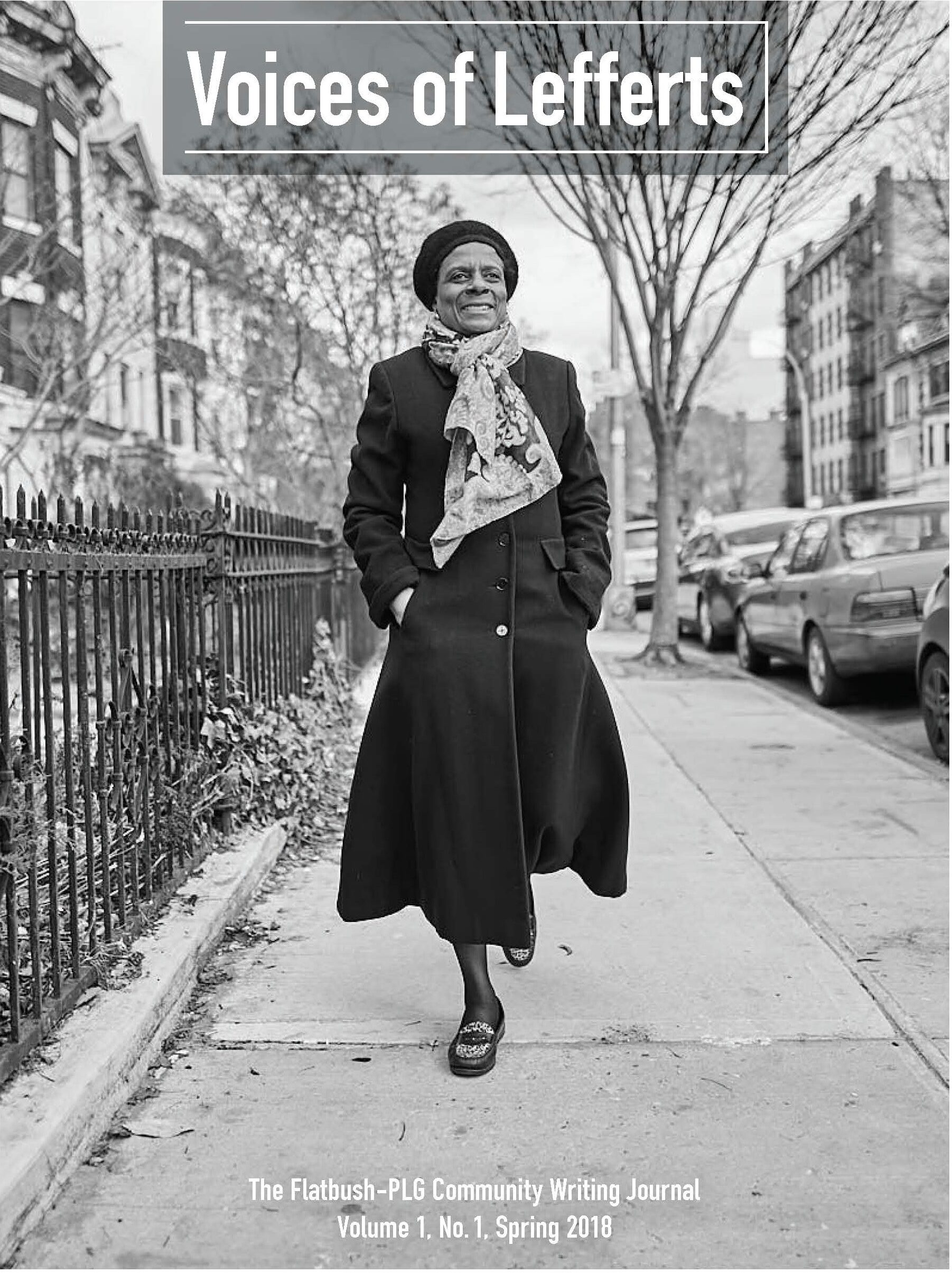 John Munnelly
And You May Find Yourself on Flatbush Ave

Editorial Perspective: Who Are “We”?

Just before the Voices of Lefferts fall workshop series began last November, there was an extended debate on the Prospect Lefferts Gardens Facebook page about the neighborhood’s name. To many longtime residents, this neighborhood was, is, and always will be Flatbush, and the name “PLG” is inexorably linked to the real estate boom that threatens to drive out longtime residents—especially those most vulnerable to rising rents and prices like the elderly, the working class, and people of color, including the area’s large West Indian population. To begin with a reference to this debate is to emphasize the conflicted sense of  who “we” are and to proclaim this project’s solidarity with populations at risk of displacement.

Anyone who lives in Flatbush–Prospect Lefferts Gardens knows that the neighborhood faces a crisis of affordable housing as prices and rents skyrocket and displacement of longtime, low- and middle- income residents accelerates. According to 2010 Census data, from 1990 to 2010, PLG’s black population decreased by 25.5 percent while the number of whites increased by 127 percent, from 2,390 in 2000 to 3,040. Virtually all of us, longtime residents and newcomers alike, seem to share the goal of economic and racial diversity that has defined the neighborhood for at least fifty years since the inception of the Prospects Lefferts Gardens Neighborhood Association (PLGNA) in 1968.

Yet despite our collective vision and the best efforts of many activist organizations, the process of gentrification continues unabated. Ironically, it was PLGNA’s campaign in the 1960s and 1970s, against banks and realtors who were driving out white residents through blockbusting and redlining tactics, that led to the creation of the name “Prospect Lefferts Gardens.” This was an attempt to fight racism by widening the perimeters of the historic district of Lefferts Manor to include a larger, more diverse swath of the community and to support the growth of an interracial neighborhood.

It is this narrative that Voices of Lefferts—an offshoot of The Souls of Lefferts photography project started by Courtney Mooney in 2015—aims to document through community writing that is, to paraphrase Abraham Lincoln, of the people, by the people, and for the people of Flatbush–PLG. The deep structural changes in wealth, housing, and demographics occurring locally, nationally, and globally today rival those that took place in the Depression era. Voices of Lefferts creates a space for PLG residents to put into practice the credo of the 1930s Federal Writers’ Project, which set out to “introduce America to Americans,” in the context of one Brooklyn neighborhood, through portraits, interviews, and local histories.

With funding from Humanities New York, Long Island University, and PLGNA, the project has been able to take root as a community writing workshop. Through a partnership with the Brooklyn Collection at the Brooklyn Public Library, we will be archiving the journal. This issue contains the work of the first group of writers in this phase of the project, a racially diverse group of old and young, male and female, longtime and new renters and homeowners. For Norma Williams, “participation in the project was uplifting.” She met “wonderful people” and got “beneficial” feedback from the group. She hopes “the young people in the community will have an opportunity to read these essays and become involved in projects such as this one.”

According to Frederick Johnson: “The project is very freeing. Novices and pros working together. The workshop is a great way to meet people and learn new skills.” John Munnelly observed that the “key theme is friendliness and openness with a nod to newcomers that they are welcome—but please recognize we are all part of a long tradition of people trudging up and down Flatbush Avenue back to when it was an Indian trail and then a dirt path cutting through farmland, but always a central artery in the life of the Borough of Brooklyn.”

The themes of the writing included in this issue resonated in all our conversations during the workshop: Flatbush–PLG is a “gem,” its people and institutions special, “what we love,” a diverse metropolis at the same time as it is a “small, sleepy village.” One participant called it a “mini-slice of heaven” and several noted that even though there are different perspectives, there is a sameness, a wholeness and cohesiveness of people and values. The authors collectively lay down a “geography of the street,” taking the reader on a literary tour of the neighborhood. They also reiterate a refrain of “Don’t say you discovered it!” to naïve newbies. “We’ve known about this neighborhood for a long time.”

In “My Parkside/My Flatbush,” Norma Williams sets out to “paint the picture of on a virtual tour of the neighborhood. Art Schaffer follows with “Our Road to Midwood Street,” the story of how he and his wife Carole came to PLG in the late 1970s. In “Grace Reformed Church: Bedford, Lincoln-Lefferts…and Beyond,” Andrea Baker chronicles her experience as a newly arrived teenager from Jamaica discovering a community at the church that she embraced and that in turn embraced her. Likewise, charting a “how we got here” narrative, Frank Marchese interviews his longtime partner Stephen McGill in “Passing the Torch.” Adding a touch of Irish humor to this issue, in “And You May Find Yourself on Flatbush Ave,” John Munnelly tells a roundabout story of searching for Sneezer, his wife’s “melancholic dog,” and becoming part of her Caribbean family home. Frederick Johnson sings the neighborhood’s praises in “The Blessing,” and lifelong resident Steven Rice gives us an “Ode to Lefferts.”

The neighborhood is always changing, always evolving, and while there is a sweetness, a generosity in these authors’ acceptance of change and their welcoming tone, there is also an insistence on the importance of history, of acknowledging those who came before us and built this diverse, hospitable, culturally dynamic place we call Flatbush–PLG (or Flatbush or PLG). After all, we or our families were all newcomers at some point and, as John Munnelly points out, the original inhabitants of this land were the Lenape, “the people.” Change may be inevitable, but displacement and unaffordability are not, which gets back to the questions of naming and of who “we” are.

When you make your voice heard by contributing to Voices of Lefferts, you also help preserve the neighborhood’s history and speak to posterity. For information about how to participate in the next round of workshops, see the back page of this issue. —Deborah Mutnick