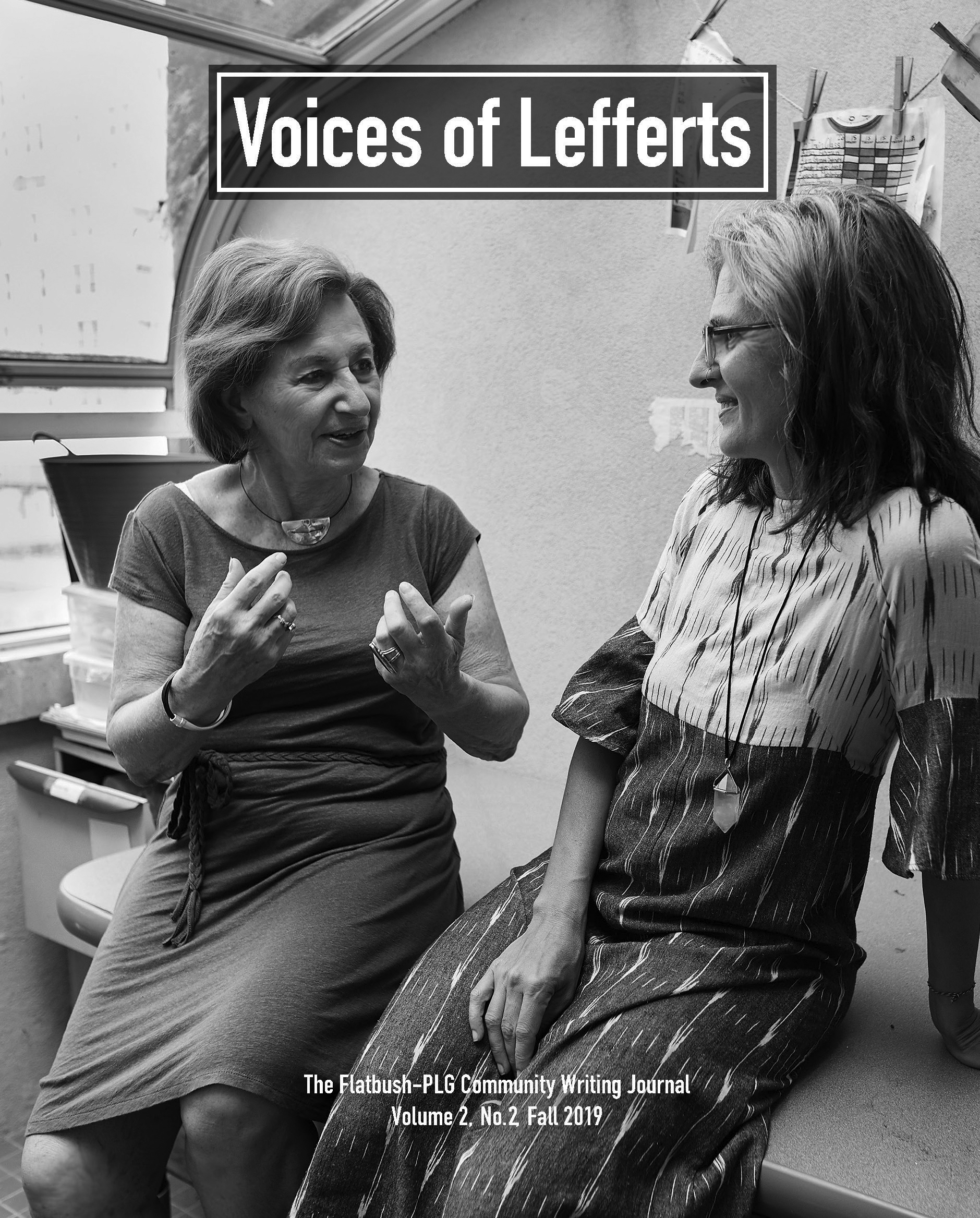 Dianna Sapp
I Found My Home in Flatbush, Brooklyn

Marcia Lloyd
The Maple Street School: From Seed to Root and Branch

Bob Marvin
Notes on Living in an Integrated Neighborhood

Wini Murdaugh
Keeping the Faith and the House

Fall is in the air. I remember the sense of excitement I felt as a young child when the leaves started to turn and suddenly we needed to wear sweaters and tights to school: a feeling between dread and anticipation of what the change of seasons would bring and what might be lost in the transition. With our fourth issue, the Voices of Lefferts project is winding up its second full year of publication. Our second grant from Humanities New York expires in December. Our project team is saying hello to some new members and good-bye, sadly, to others. We have applied for new grants, and, especially noteworthy, we are launching a new feature of the project—oral history training sessions for residents to go out and interview family, friends, and neighbors and, hopefully, help us build our archive of neighborhood history as told by the people who live here.

There are so many stories to be told. Typically, the stories we publish are those by writers participating in the project. One I would like to publish eventually is about 41-year-old Dwayne Smith, a longtime Prospect Lefferts Gardens resident who was tragically shot and killed inside the KHF bodega on Flatbush Avenue on October 11. I did not personally know Smith, who was also called “Stacks” and “the mayor of Flatbush,” but according to Facebook posts, blogs, and news reports, he was a beloved, well-respected father of six; an aspiring filmmaker, director, and writer; and a clothing designer. He helped rescue twelve people in a fire in the neighborhood. He was “a superhero of Parkside.”

In a photograph of Smith in the Daily News, he is sitting on Flatbush Avenue in front of the store in which he lost his life. It is a warm day, as he is wearing a T-shirt and shorts. Elbows resting on his knees, a purple cap on his head, he is not smiling, but his expression is kind, focused, and wise, his eyes looking straight into the camera—almost as if he is looking at us, the viewers, and clearly having much to say. How tragic that he can no longer speak to us.

These are the stories—not, in Dwayne Smith’s case, of his premature death but rather of his rich, full life and what he so generously gave to the neighborhood—that must be told if the history of Flatbush-Prospect Lefferts Gardens is to be honored and preserved. Such stories are crucial to any vision of the neighborhood’s future—not to arrest change, which no one can do, but to direct it to meet the aspirations and needs of the entire community. Big development is not a natural force like a storm; it is enabled by conscious decisions about zoning, taxation, and profit. Motivated by the exigencies of escalating development and displacement, Voices of Lefferts is especially attuned to the struggles of those most vulnerable to rising rents and prices. It welcomes all residents—newcomers and those who have lived here for generations—to participate, learn from one another, identify and resist forces hostile to culturally and economically diverse city life, and contribute to building a neighborhood that serves the needs of all its inhabitants. It is this critical response to local history, this capacity to call a public into being, that makes our project relevant and necessary.

In writing several grants for the project to enable its continuation, I emphasized its public face through art and photography exhibits; author readings at Greenlight Bookstore; and the publication of the journal, nearly 800 copies of which have been sold. I asked rhetorically: What do readers and audience members at author readings find so appealing about the journal? And I believe the answer, among many factors—the ethos of the writing, photography, and artwork; the place-based nature of the project; and the “look” of the cover and interior—is that the journal’s deepest appeal lies in its function as a mirror in which readers, writers, and audience members can see themselves. They recognize their published neighbors. They identify an illustration of a store they walk past every day. They are family members of the person on the cover. Their kids currently go to the same nursery school, the history of which one of the authors in this issue writes about.

This experience of seeing ourselves reflected in the places we live and work is profoundly important in forging any cultural legacy—a legacy that is always fraught with the conflicts and tensions of the past and, often, the confusing forms they take in the present. Too frequently, people are left out of that mirror: they don’t see themselves reflected back in literature, art, or public dialogue. They may see themselves other than how they wish to be seen. Voices of Lefferts intentionally and consciously aims to create the conditions not only to represent, as fully as possible, those who live in the neighborhood, but also to reflect critically and collectively on how and why that has changed and continues to change, with all its troubling historic implications.

In this issue, we are proud to publish seven essays, by Dianna Sapp, Marcia Lloyd, Bernie Jones, Bob Marvin, Caroline Holden, Wini Murdaugh, and Liz Oliver. In “Finding Home: Harlem on My Mind,” Dianna Sapp tells the story of her move across the river from Harlem to her new home in Brooklyn when she was in her early twenties. Her portrait of her then-young family as they sought more permanent living quarters with first two, then three, and eventually four daughters depicts the everyday struggles of people in the neighborhood to find reasonably priced rentals and reasonable landlords. At the heart of her essay is her chronicle of her long-time residence at 60 Clarkson Street and the firsthand account she provides of residents’ battles with the current landlords.

Marcia Lloyd writes about The Maple Street School, which she and some other mothers in the neighborhood helped found. Now in two locations—the subway station building on Lincoln Road, where it moved in 2001, and at 646 Flatbush on the second floor of the new high-rise directly above Greenlight Bookstore—the school has served generations of children, including Marcia’s daughter and her grandchildren.

Bernie Jones and Bob Marvin could be said to be taking the neighborhood’s pulse on issues of gentrification and racism. In “Reflections on a Changing Neighborhood,” Bernie acknowledges that neighborhoods inevitably undergo change, but asserts that when she moved back to Brooklyn as an adult, “the scope and nature of the actual transformation I have encountered feels anything but natural.” In his essay, “Notes on Living in an Integrated Neighborhood,” Bob likewise reflects on changing neighborhoods, but situates that reflection nearly fifty years ago, when he and his wife Elaine were house hunting in an era of redlining and blockbusting real estate tactics.

Reminiscing about growing up in Brooklyn with immigrant parents and her younger brother, Caroline Holden recalls the poignant sweetness and pains of childhood. The smells, sights, tastes, and sounds of Brooklyn haunt her essay, “Ghosts of Yesterday.” Brooklyn-born readers of a certain age will appreciate her loving description of chocolate blackout cake from Ebinger’s bakery, where her Hungarian father was a baker. Her mother was a ballet dancer. This candid memory of childhood cuts to the emotional core of who we are, even when, as Caroline notes, we are still figuring it out.

Not unlike Virginia Woolf’s description in To the Lighthouse, of the empty Ramsay house as “time passes,” Wini Murdaugh chronicles the passage of time in her essay, “Keeping the Faith and the House.” She records life-changing losses and the “indescribable and almost paralyzing grief” that comes with them in light of renovating her house. “I had to make more changes,” she writes. “I had to make the house a sanctuary for me, but, at the same time, make it look different. Now I had to get rid of almost everything that reminded me of my past life. Now I was flying solo.”

Finally, in “Mr. Halfhide’s Sacred Hoop,” Liz Oliver weaves the story of Mr. and Mrs. Halfhide together with her relationship with them as their tenant and friend. Arriving in New York in 2011 after three years of living abroad, Liz found a “sunny sanctuary” in the second-floor apartment of the Halfhides’ limestone at 165 Lefferts Avenue and a “warm embrace” from the neighborhood as a whole. After moving out in 2017, she returns, following Mrs. Halfhide’s death, to interview Mr. Halfhide in the parlor where the sun shines through a stained-glass window depicting a white buffalo, a symbol of hope.

Many thanks to all our supporters: Humanities New York, Greenlight Bookstore, Grace Reformed Church, the Brooklyn Collection of the Brooklyn Public Library, LIU Brooklyn, Prospect Lefferts Gardens Neighborhood Association, Lefferts Manor Association, PLG Arts, Drink PLG, Park Slope Copy Center, individual donors, and all of you. We are sad to announce that our wonderful photographer, Alexis Holloway, is moving on to pursue her own burgeon-ing career—we wish her the best of luck—but we are happy to welcome filmmaker, photographer, and PLG resident Liz Dory to the project team. —Deborah Mutnick